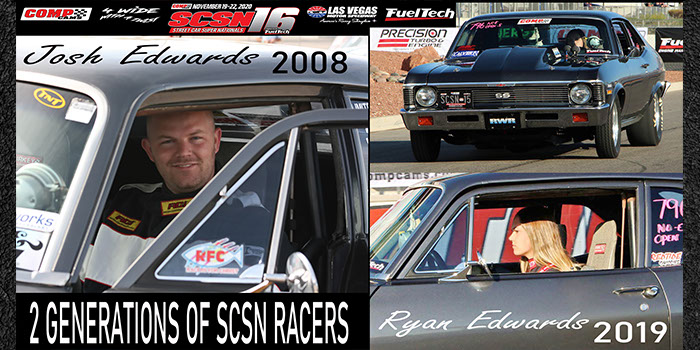 In 2008 Josh Edwards was going rounds at Street Car Super Nationals Las Vegas while his Daughter Ryan was barely outta diapers..... Jump to SCSN15 in Nov 2019, while Josh's career is entering into his twilight years, Ryan is more than ready to carry the family name back to the Winners Circle driving the same car Josh drove back in '08!

Josh told us earlier today "She is competitive. Races like me but has her moms attitude. That’s dangerous!"

Ryan has 2 sisters ages 11 and 7 to follow in big sisters driving shoes, so Dad better get busy building cars for them!

FYI, Josh did win XDR at SCSN14 in 2018 driving Rick Webb's ProCharged Camaro, so he might have a few more solid years of driving left lol